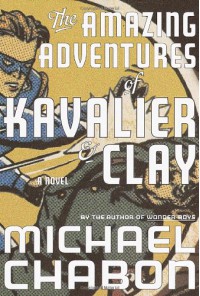 This is going to be one of those reviews in which the reviewer wishes the novel was about something other than what the author wrote.

Kavalier and Clay are cousins, one a refugee from Nazi occupied Prague, the other a kid from Brooklyn. Kavalier is a talented artist and Clay an inspiring writer and together they get in on the start of superhero comics with their character the Escapist, a Houdini inspired hero who mostly fights Nazis. I find the history of comic books and the writers and artists who created them to be a fascinating story and I hoped this novel would tell that story, but the early days of comics are just a background for the complicated relationships of the two main characters.

For a novel that touches on the plight of Jews in eastern Europe during the Third Reich and the plight of closeted gays in early 20th century America, Kavalier & Clay is a surprisingly fun novel. Kavalier has most of the adventures, and they are amazing. Clay mostly makes wisecracks on the sidelines. There are elements of a fiction trope I think of as "all happiness must die." Whenever the characters in a book or film are getting too close to happiness you know something is about to ruin everything, and that absolutely happens at about the 2/3rds point of the novel.

The book has a running theme of escape, both literal and metaphorical. Kavalier literally escapes from Czechoslovakia and then helps his cousin escape from his dreary suburban life. At various times both Kavalier and Clay attempt to escape from their whole lives by packing up and leaving or by pretending to be something other than what they really are. Comic books and genre fiction are often disdainfully dismissed as escapist. I have marveled at the level of literary snobbery that leads someone to dismiss anything that is not serious and/or depressing as escapist. If it means escaping from the wardens of the imagination, then I am all for the escape attempt.