The Ballad of Kite Man 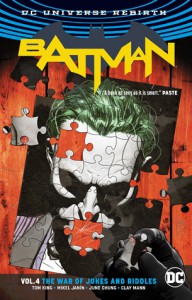 Tom King writes superhero stories about psychological trauma, not just as a plot element but as a raison d'etra. In books like Vision and Mister Miracle the psychological trauma is the engine of the plot. In his new series Heroes in Crisis an attempt to recover from trauma leads to far greater trauma. Batman: the War of Jokes and Riddles reveals a story from Batman's second year as a hero. The Joker and the Riddler go to war, not for control of Gotham City, but over who gets to kill Batman. Every name villain in Gotham gets roped into the fight on one side or the other, hundreds of civilians are killed in the crossfire, and Batman is forced to compromise his core values to try an end the war. Despite the death toll, in places it reads like an homage to the old Batman TV series from 1966, with Batman trading punches with bad guys with "POW" sound effects. In the end Batman is so traumatized he feels like his whole incorruptible persona is a sham.

Oh, and it is the origin story of Kite Man.