He Sings the Creepy Nostalgia 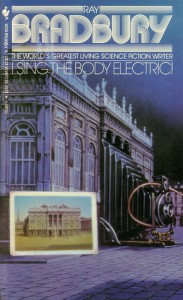 Bradbury at his best combines nostalgia and creepiness in a tone reminiscent of the old Twilight Zone TV series. At his worst his prose is florid and purple with just enough misogyny to make reading him very uncomfortable. The writers of Mad Men must have grown up on Bradbury's fiction because all his men tend to have a drink in one hand and a cigarette in the other and take no guff from their women who are silly and hysterical and often need a good slap.

There are some good examples of Bradbury's short fiction in this collection. Heavy-Set is a genuinely creepy tale of a socially awkward loner that offers no solutions. Yes, We'll Gather at the River captures the fatalism of a dying small town. The strongest of the collection may be Night Call, Collect in which a bored twenty year man plays an extremely cruel joke on his future seventy year old self.

Bradbury's misogyny is on display in several stories. Tomorrow's Child features a bad mother who becomes a hysterical alcoholic after giving birth to a mutant child and has to be slapped back to her senses by her husband. The Haunting of the New has a wealthy socialite rejected by her new house for having lived too promiscuous a life. The main character of The Tombling Day is an extremely vain old woman who envies the dead because they never age and become unattractive. In The Lost City of Mars a poet repeatedly kills himself in a simulator to escape from his hated wife. The only positive female character in the collection is the Grandmother in the title story, and she is a female robot who has to care for the most angry and bitter little girl in fiction.

While Bradbury uses the Walt Whitman quote "I sing the body electric!" just as a way of referring to a robot, he actually tries to use Whitman's literary cataloging technique in a few of his stories and the results are tough. The title story as well as Any Friend of Nicholas Nickleby's Is a Friend of Mine include cataloging rambles that come across as self-consciously literary and pretentious. I find myself wishing Bradbury had followed the example of Thomas Wolfe would used the technique so well in his novels.

I have criticized the collection quite a bit, but there is material here worth reading. If you enjoy creepy nostalgia you will enjoy Bradbury, even though you have to put up with his excesses.